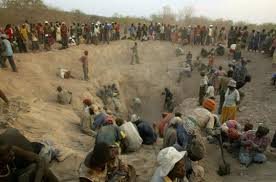 For year parts of Africa was plagued by civil war and gross human rights abuse fuelled by easy access to capital from the trade of conflict or blood diamonds. In the end it was the developed world’s consumers heavily backed by Hollywood that helped stop or limit the trade. Especially the film “Blood diamond” helped pave the way for a process that eventually led to the relative success of the Kimberly process. The Kimberley Process is a voluntary group of diamond-trading countries and civil society actors set up to prevent the trade in conflict or blood diamonds. It claims to controls more than 99 percent of the world’s diamond market.

However, this work is now in jeopardy because as most intergovernmental institutions it has a weakness which it can’t overcome namely it is based on voluntary participation and the ethics of its members.

Zimbabwe have for a long time been in violation of the almost all Human Rights charters that the UN has ever published. It has oppressed its own people to such a degree that what were ones know as the “breadbasket of Africa” now can’t even feed its own population. In order to raise hard currency the country has started to exploit the rich diamond fields in the eastern parts of the country. There have been accusations and charges of human rights abuses and looting by the army and government officials, especially at the notorious Chiadzwa field.

The trade of diamonds would be fine if it had not been for this systematically exploitation and oppression of the Zimbabwean people and not least the workers in working the fields.

Now the Kimberly Process Certification Scheme has sent the Zimbabwian government a letter that permits the African country to continue conducting supervised sales of diamonds mined at the controversial Marange fields according to a senior government official.

Deputy Minister of Mines Gift Chimanikire who took office in mid 2010 said that Harare has received the letter allowing it to trade diamonds mined between 2006 and 2009.

“We have been … waiting for a go-ahead,” Chimanikire told the German Press Agency dpa. “We are working on modalities to have the sales as soon as we can.”

The material weakness of the Kimberly process is to my mind very clear. It will rather support an oppressive regime than blacklist Zimbabwean traders even though there is plenty of evidence that supports systematic violations is taking place. The alternative would be that the market is flooded by conflict diamonds outside any regulatory control.

But the problem is that the Kimberly process by doing so is lowering the standard for what other countries can do to its own people and still claim to be ethical. The question what how this will impact the image of the Kimberly process and its claim of legitimacy as a certifying body?

According to themselves is “The Kimberley Process Certification Scheme (KPCS) imposes extensive requirements on its members to enable them to certify shipments of rough diamonds as ‘conflict-free’ and prevent conflict diamonds from entering the legitimate trade. Under the terms of the KPCS, participating states must meet ‘minimum requirements’ and must put in place national legislation and institutions; export, import and internal controls; and also commit to transparency and the exchange of statistical data. Participants can only legally trade with other participants who have also met the minimum requirements of the scheme, and international shipments of rough diamonds must be accompanied by a KP certificate guaranteeing that they are conflict-free.”

After allowing the Zimbabweans to trade diamonds from a period in its history were there were no controls and no transparency will the Kimberly process be able to claim that these are truly ‘Conflict free’?