It would seem that the whole world evolves around the subject of money for as long as anybody care to remember the world have focused on getting money or capital. Even in the Soviet Union there was a relentless pursues for getting capital, by boosting their own money (the Ruble) they tried to get their hands on as much foreign capital as possible. In the end they, as we all know, failed to get their hand on enough of the stuff to keep their communist paradise working but that just support the fact that the world is just hungry for the stuff.

There is of cause an alternative to money. If you chose to live and work in a isolated place were all exchange is made based on a economy based on the things you produce you really do not need to invent money. However, we have chosen to invent money because it is the easiest way to exchange wares and information. It also makes things less complicated, while we think that the globalised world of economics is a complicated system think of it if we had to exchange everything with a proportionate amount of things. How much coffee in Africa would you be able to buy for a Danish cow and how much of the cow would be given to the transporter? If you made paperclips how many would you have to pay the people who made them at your factory and what would they be able to buy for those clips in their local bakery? One could only imagine how cumbersome bartering as it is called would be if we implemented it on a large scale.

So money makes things easy. They are tokens of what we as people appreciate as value. This does not mean that we from time to time will accept other forms of currency. Like the exchanges seen on black markets around the world were exchanges are made in natural resources. An example can be the cigarette economy we see in prisons or in the post World War 2 or the exchange we make with the neighbour when we exchange a favour.

So the main characteristics of money are:

It is the last of these very true statements about money, which I think is the most important because it controls all the others either directly or indirectly. 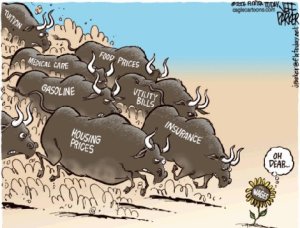 At the time when money was born we used Silver and Gold as the medium of exchange. The king or government who controlled the flow of money could make coins that could be used for exchange but which also carried a real value in themselves, namely the value of the gold or silver that made up the coin in the first place. However, what happened was that in time of trouble kings and governments tried to forge the coins by using less of the valuable metals. This practice worked well as the king could mint more coins this way and by that ‘inflating’ the value of his fortune. This lasted until somebody found out that this practice was undertaken and people adjusted the price according to what the king had done. But as it was difficult to say exactly what the amount of gold or silver that was exchanged in the coins it was more like a qualified guess of what the inflation was. So even f the king started to print money with the right value it would continued to be undervalued for a period of time until the price could be adjusted and the market had confidence in what the king was doing. We actually used gold as the standard to determine the value for money all the way until after the Second World War, which can serve as a witness as to the confidence that people and governments had in the standard.

What happens when you have more money than needed in the system? Well basically it becomes worth less. Like in our barter economy if you have too many paperclips in circulation the price will start to drop. This is exactly what the central banks of Europe and the US is doing when they keep the interest rates down. As money is flowing out of the system because of the crisis they are pumping money in by printing more money than is flowing out. So what will this mean to you and me.

Well if you won a house you will properly be paying less money for it on a monthly basis. By having cheap interest rates you will be able to borrow more money at a cheaper price and thereby you will be able to buy a bigger place to live in. Also other types of loans will be cheaper so you can buy the new Apple IPhone or a new car by going to the bank and getting cheap cash. Some stores even let you lend money at a zero interest if you buy one of their products. But cheap money also leads to higher inflation because just like the kings of the Middle Ages people cant be certain what the real value of the money that they have in hand is really worth.

The consequences of inflation are that the things you need to buy for cash becomes more expensive. So when you go to the supermarket the price for food will be higher, when you want to get something for the wife or you husband it will cost you more. While some of this increase in price can be contributed to the dynamics of the market and society in general one will not be able to explain the whole increase. The testimony that support this claim can be found in the fact that the price for food all around the world is on the increase and have been for some time.

Another consequence of inflation is on everybody that has savings in the bank. If you have money saved you might get every were from 0.2 % to 1 % interest but if the inflation is 4% you will loose money. So what people do if they have enough and can look at substantial loos is to invest their savings either though a pension fund, through investment companies, or make the investments them selves. This works well as log as the market is expanding and everybody is making a profit but in times like these investors can look at substantial looses and even more than they would have if they had kept the money in the bank on a regular account. This can lead to even more speculation and risk taking leading to even greater instability on the market, which again leads to even more money disappearing from the system.

Some would claim that monetary inflation is actually a tax by which government or kings for that matter transfers wealth from its people to itself. Inflation is perhaps the most destructive tax that can be imposed on people but it is unfortunately also the easiest one for a government to impose – it just needs to print more money than needed. It results in the transfer of enormous amounts of wealth from the hands of people to the hands of those speculators shrewd enough to take advantage of the price volatility inflation causes in the markets.

Inflation is a strike against the welfare state. In most western countries a large majority of employees work for the government either directly or indirectly. All the funding for the states activities comes from the taxes it is able to impose on its citizens so there is a clear interest for the state to decrease the wage demand from the public servants and the money they spend on behalf of taxpayers. However, when the wages in the private sector increase as we could see post 2007 then there becomes a demand from the public servants to get paid more. The money to fund this increase can either be found in continuing to have a significant wage gap between the public and private sector, by increasing taxes or by decreasing government spending. But many governments have opted to do neither because it was politically unsound so what they have done if they could was to increase inflation either though printing or though borrowing. This is what we have seen in Greece, Italy and the US who have resorted to systems were they are spending significantly more than they GDP would normally allow for.

So what can governments do? And this is where it becomes tricky and more a thing belonging to ideology or theology. One ideology would prescribe to cut government spending at all costs and decrease the budget to what is actually is coming in in the form of tax revenue. Another group would go the other way and use money to boost the market and crate jobs feed by government activity like infrastructure or better education etc. The thing is that we do not really know the dynamics of a globalised economy at the scale we see today. There is no theory that will prescribe what to do if we want to keep our welfare state in some form of working order and keeping an society which can provide the benefits which we have fought hard to get over one hundred years.